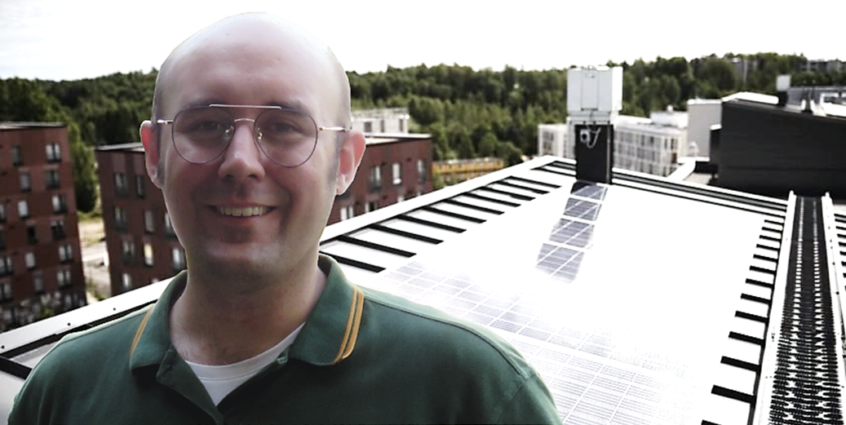 Urban Academy partner cities Espoo, Helsinki and Vantaa are funding postdoctoral researcher posts in urban studies at Aalto University and University of Helsinki for the period 2018-2023. The research themes are selected in collaboration with the cities so that they support strategic development and planning of the cities. Urban Academy asked researchers to share their thoughts about their research and interests. Marco Lovati works as postdoctoral researcher at the Aalto University department of architecture.

Can you describe your current research projects ?

I am working on a simulation tool to estimate the value of a urban photovoltaic system (photovoltaic + electric/thermal storage + electric mobility charging point). The goal is to increase the installations of photovoltaic systems by helping to decide where it is more valuable in the city and what capacity is best for a specific system. The innovative aspect is that the simulation will be performed using the City of Helsinki CIM (City Information Model) available at kartta.hel.fi/3d.

In general the problem of the photovoltaic technology is that is unreliable and tend to produce too much in summer daytime. The tool I’m developing will serve as a way to simulate how the photovoltaic energy is produced and used. To do this is necessary to estimate the demand of electricity for homes, for space heating, and increasingly for electric mobility. The CIM serves as the data basis for the simulation. To plan urban photovoltaic systems with this tool will be a safer investment – it will be possible to see how much of the electricity is self-consumed in place and dimension the system correctly. Furthermore, for owners of several properties like public entities, building developers or property portfolio owners, it will be possible to guess what is the best location for installing photovoltaic systems.

What are your current special interests or sources of inspiration?

In general I am a big fan of science fiction books, one that is related to the concept of digital twin, albeit a stretch from today’s technology, is “Permutation City” by Greg Egan. It plays a lot with the concept of virtual reality and is a must-read for whoever works or loves simulated systems. Another book that captivated me recently is “The Three-Body Problem” by Cixin Liu. It starts from historical events and slowly moves into the future, it is fascinating to follow the evolution of society and technology at increasing energy consumption levels in this alternate version of history.

What kind of impact do you wish that your research or research field in general has on the society?

I would love if humanity can become a post-scarcity civilization, one where physiological and safety needs are universally met. Our heavy reliance on fossil fuels is a big obstacle for gaining post-scarcity status. Fossil fuels are inherently inflationary: as we use more, it becomes more demanding to maintain or increase the output. Besides, a changing atmospheric composition makes every aspect of civilization more difficult compared to a static one, especially agriculture, forestry and ecological maintenance. If we can reduce our reliance on fossil fuels to a marginal level, we can then dedicate more resources on rewarding endeavors such as space exploration, scientific inquiry and others. Of course I will likely not live to see a post-scarcity civilization, but anyway I hope to have at least a tiny impact in favour of later generations.

Can you name a city or cities that have played important role in your life? What is your favorite city in the world?

During my life I visited and lived in numerous cities and it’s really hard to pick a favourite. In general the identikit of a city I love is a coastal metropolis: I like the spaciousness and the smell of the sea, and I like cities that have many corners to explore. I am in Helsinki since a very short time, but I think I will love it: it has plenty of green and does not lack historic sites, and the rocky formations like those in Temppeliaukio give it a distinctive cityscape. Helsinki is most peculiar in its scale, let’s say that is the smallest possible big city: is large enough to make it feel like a metropolis, but small enough for biking.

Photo on the background: Jussi Rekiaro/City of Helsinki